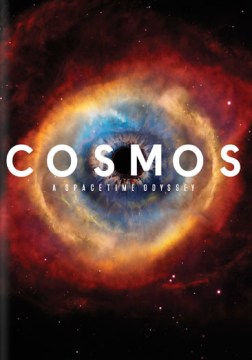 The set that I checked out was all good except for disc 1 which froze and wouldn't play 2/3th of the disk. Disk 2 - 4 worked fine.

Whetstone is our neighborhood library, but seems when I put this ON HOLD, there was not an option to have it sent here. I don't see where it will go. THANKS!

Nothing can compare to the original 1980 COSMOS written almost entirely by Carl Sagan (Steven Soter and Ann Druyan are credited also). The pacing is more contemplative. It's just a shame that there are no truly high-quality copies of the original, uncut, 59 minute episodes, with the original music.

In short, see the 1980 COSMOS first. See the series that changed television and our culture.

Only then, see the 2014 Cosmos. Ann Druyan (Carl Sagan's wife) manages to bring the magic she learned by being next to Carl for 20 years. Steven Soter also helped a bit with the 2014 season of Cosmos. Neil deGrasse Tyson narrates, and he's not bad with the proper editing and direction, reading their script. It's actually moving, especially the parts where they mention the late, great Carl Sagan.

Every child should see the original COSMOS by 10th grade. The 2014 season is also worthwhile.

Fantastic series! Every student should have a science teacher as enthusiastic & insightful as Neil DeGrasse Tyson. The writing, presentation, animation & CGI are all excellent.

Love the series !!! Carl Sagan version is stoned out classic ~420

Eduacational tv series for the whole family to enjoy!

The astronomer Neil deGrasse Tyson, of the American Museum of Natural History in New York City, serves as narrator, giving him a chance to make the case that he’s the Sagan of our generation. “‘Cosmos’ is more than Carl Sagan,” Tyson says. Our capacity to decode and interpret the cosmos is a gift of the method and tools of science. And that’s what’s being handed down from generation to generation. If I tried to fill his shoes I would just fail. But I can fill my own shoes really well.”

I thought it was a wonderful documentary, but with all the information it made my head spin :)

Quite repulsed right from the first chapter by the one-sided, judgmental and historically erroneous representation of Bruno case. Bruno was never considered a scientist in the first place, he was a philosopher/poet, but never a scientist. Galileo insisted on not having any connection with Bruno in any scientific works of that time. Bruno had a very superficial knowledge of Copernicus works.

An excellent follow-up to the original series. We need many more of this type of program in order to help combat the superstitious mumbo-jumbo that we are constantly being fed by various special interest groups, governments, etc. Here's hoping they make a third series.

I wish I could give this six stars. Visually stunning and easy to understand, this recap of scientific breakthroughs and basic concepts is suitable viewing for adults and children. One of the best documentaries I've seen.

A remake of Carl Sagan's 1980 science documentary w/the same title. I guess the two things which I noted comparing the two were that (1) very little new of import has been discovered since 1980 about this subject; and (2) PBS is a better media for this type of science programming, as the program can be produced without needing to include breaks for commercial interruptions. The 2014 version of Cosmos, the subject matter remains interesting, but has the feel of being overproduced. And the dramatic music inserted at the breaks where the commercials were intended is annoying. You've got one thing going for you anyway: Get on your knees and thank the heavens (no pun intended) you are watching it on DVD and not on commercial tv. Watching it with the inserted product commercials, that must have been a very frustrating experience for the viewer. Worth a watch for science enthusiasts; but if you only have time for one version, the 1980 version is better.

An awesome blend of science, history and special effects that hopefully will have a similar effect on this generation as the original series. I tried to get my son to watch the original but the dated effects could not hold his attention. However, the spectacular effects in this new one kept his attention so much that I had to stop it frequently to answer the questions he had about the content. As for the science, it pulls no punches and Neil Degrasse Tyson is a great host, once you become accustomed to his unique presentation style (which is a lot like he speaks in his podcast).