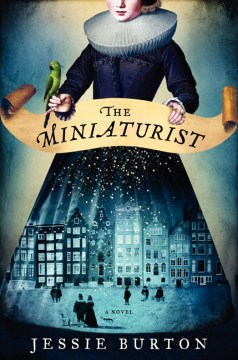 Engaging the services of a miniaturist to furnish a cabinet-sized replica of her new home, 18-year-old Nella Oortman, the wife of an illustrious merchant trader, soon discovers that the artist's tiny creations mirror their real-life counterparts in eerie and unexpected ways.
Publisher: New York : Ecco, 2014
New York : Ecco, 2014

Magical realism where the setting itself is almost a character.

Usually I’m not super into historical fiction, but when there’s a creepy element like in this book…I’m here.

This book was only fair. I likely will not read more by this author.

So I like this book until half-way, the last act fell flat for me. I just wanted more but the historical parts were great.

Love it! Page turner! Read the whole thing in a weekend because I couldn't put it down.

Never quite reaches its potential, slow paced, leaves much to be desired.

After seeing this on OPB I had to read the book, and I'm so glad I did. It's, of course, even more captivating. An excellent historical novel about a time I know very little about, and a strong woman who rises above all that is set against her.

The cover was what attracted me to read this book.

I very much enjoyed the details about the figurines and miniatures made of the various characters that come into Johannes Brandt's home. Especially the way things develop and how the miniatures are tied to what happens in real life.

There are a lot of unexpected moments, secrets that happen within the household and behind closed doors that you never know what to expect (view spoiler).

However, while the magical side of the miniatures were presented in the book, it never seems to fully manifest nor do we actually meet this miniaturist. Would have liked to seen parts of the story told through other people's eyes besides Nell's innocent point of view.

I found this book to be a historical, magical mystery that never really explained the central theme of the plot narrative. The elements were there for a good story but somehow it fell flat for me. It also seemed a bit incredulous that all the events of this novel could have happened, including the development of the relationships, over a scant three months.

This story follows Nella, an intelligent and adventurous but still naive eighteen year old from the countryside of 17th century Netherlands who needs to make a good marriage after her father dies of drink and leaves her family without resources. She makes what she and her mother believe to be a good marriage to older, distant Johannes who is a successful trader in Amsterdam. She tries to feel her way through her husband's mysterious household- particularly her severe sister-in-law Marin- and the intrigues of the Amsterdam business world. The cabinet house she fills with miniatures are at first an annoying obligation, then something more. Will this hobby enlighten her, or is something devious at play? Nothing, however, can be more sinister than a civilization which praises God and Mammon in the same breath, and woe unto the person who can't balance his or her hypocrisy.

The story had a number of twists. The first one was easy to guess, but the others much less so. If Nella can't unravel the mysteries at first, they make sense upon review when we remember that not all rules are applied equally. Some of it is power, some of it is prejudice. Old news, perhaps, but it's always good to question how it should be handled. And not all rules, perhaps, are man's rules.

“Every woman is the architect of her own fortune.”

In suffering do we find our truest selves.

Growing older does not seem to make you more certain. It simply presents you with more reasons for doubt.

Nella escapes her dreary dead-end future in small-town Netherlands via an arranged marriage to a successful merchant in Amsterdam. She enters the household of Johannes, his sister Marin, and their servants Cornelia and Otto. The big business deal on Johannes' plate is to sell a warehouse full of sugar. He'll split the profits with his former best friend, who is very eager to get the sale in motion even though it's not the best time of year to do so. He gives her a miniature house as a wedding gift. Soon thereafter, she begins receiving exquisitely created miniatures of the members of the household and the furniture in the house. Then the gifts begin taking on something of a magical predictive quality, i.e., the miniature dog develops a smear of red on his skull, and later the dog is stabbed in the skull and dies. Johannes is distant and often absent and seems to be disinterested in Nella as a wife. Turns out he's gay, which Nella discovers when she interrupts him in flagrante. His former best friend catches him, too, and turns him in to the police. It's a crime punishable by death to be gay in 17th century Amsterdam. He is "tried" and found guilty, and executed by drowning. Meanwhile, his sister Marin has given birth out of wedlock to a daughter fathered by Otto, the black servant ("a savage") Johannes brought back from his travels to Africa. She died in childbirth. So the story ends with Nella, Cornelia, Otto, and newborn Thea living together in circumstances created primarily by Johannes and Marin -- and the society of 17th century Amsterdam.

The mystery of the miniatures and their maker was not revealed.

There are no ages for this title yet.