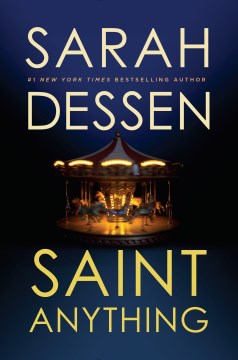 Sydney's charismatic older brother, Peyton, has always been the center of attention in the family but when he is sent to jail, Sydney struggles to find her place at home and the world until she meets the Chathams, including gentle, protective Mac, who makes her feel seen for the first time.
Publisher: New York, New York : Viking, 2015
New York, New York : Viking, 2015

Author of the Month: Sarah Dessen

Summer reading has just launched at the library -- school is out, and our readers finally have a chance to pick up a book that hasn't been assigned to them, and simply enjoy the stories that unfold. Every year, our staff try to point our summer readers to titles that will stay with them long after the summer has passed, often drawing from our own reading histories to guide them toward authors… (more)

I can really relate with the main character because a large part of my life has always been trying to keep the peace and please my parents by doing what they want rather than what I want and think is best.

Check out my review of "Saint Anything" on my blog at:
http://axarr.blogspot.com/2015/12/review-wednesday-saint-anything-by.html

I like reading Dessen's stories. They might be a little unrealistic, in terms of the setting or the resolution, but they're genuine in their emotions. I have always related or connected to some parts of the protagonist's life if not its entirety. I also like how it's not always a picture perfect resolution at the end, but there's always some progress with hope for better. Also, love how it's all in the same Lakeview universe.

I've read all of Sarah Dessen's books, and I must say this one is rather incredible. I felt it had more personailty and observance with the main character than some of the others, and it was a difficult novel to put down. I highly recommend this to anyone who loves Sarah Dessen and the likes of her.

Tbh kinda boring and a little frustrating but I liked it

Who has siblings and feels that sometimes they overrule your vote? Well, probably a lot of people. So meet Sydney. The girl who is often hidden in the curtains in comparison to her older brother Peyton. Then this brother gets into an accident, and everyone fusses over him a lot more than who Sydney thinks they should care about. Then enters a boy. But this predictable relationship really isn't that similar to your average relationship. Truthfully, if one looks for deeper meanings underneath surfaces, a lot can be found. 4/5 Stars
- @Siri of the Teen Review Board of the Hamilton Public Library

Sarah Dessen really deals with some hard topics, while sprinkling in things everyone can relate to. In this book, Sydney's brother is in prison and she is dealing with feeling invisible in her family and holding all the guilt they refuse to acknowledge for what her brother did. She decides to transfer from a private school to a public school, because the attorney fees for her brother were expensive. At her new school, Sydney makes some new friends whose family is completely different from her own, but has experienced some of the same things - both older siblings fell into trouble that affected the whole family. But instead of pretending it hadn't happened, the family addresses it head on and continues to be close and loving. The matriarch gives Sydney a lot of advice on how to deal with her family situation and all the guilt she carries for her brother's actions. While Sydney does not really do anything with this advice, but things still manage to get tied up nicely, it was nice to see one reasonable person in this story. Overall, very nice story to show how sometimes it takes an outsider's perspective to help someone heal and come into their own.

Sarah Dessen’s inspiration for Saint Anything are “invisible girls” and I don’t think there’s a book that better represents this. I felt it was an emotionally gripping, superb portrayal of the experience so many people have felt or continue to feel. It also extends to the things that make us visible, in ways we don’t want as well as those invisible beasts clawing at us daily. When I finished this book, I wanted to re-read it – but without knowing how it ended – so that I could relive this book constantly. If someone invents such a device, Saint Anything will be the first book I try it out on.

The main character, Sydney has always felt invisible and not only could I see myself in her, I could see the experiences of others in her as well. Dessen creates this flexible character, one who doesn’t just appeal to one type of reader, but several. Additionally, there are certain moments when Sydney and her mother are at conflict with one another and the after effects had me feeling very frustrated for Sydney [in terms of unfairness etc.]. I can say without any doubt, Sydney is a very real, very three-dimensional character to me.

Saint Anything is also about perspective, in that “grass is greener” type of way. Other characters have invisible fears of their own and the way they view others, compared to how Sydney see’s things, is very surprising for her. This is definitely a moment of character development. For example, we have Mac Chatham who provides a curious dynamic because he see’s Sydney – she thinks for the first time – and some fears of his own are revealed. Dessen has created a cast of characters embodying different types of invisible fears, and it’s with Sydney that this cast is able to grow astronomically (even Sydney herself).

The plot revolves around Sydney’s older brother, Peyton and how he’s always been the limelight of her family, particularly their mother. Peyton is currently serving time for a drunk-driving accident, one that caused someone to become permanently paralyzed, and Sydney is left with this huge guilt on her shoulders, feeling as if she’s the only one of her family to carry this burden. The plot is engaging, there’s nothing monotonous about Dessen’s storytelling. It’s with the author’s storytelling skill that a concept like “invisible girls” can be told so well. The more I read, the more I was drawn into the novel. And of course, the ending has that sense of conflict resolution; Saint Anything is entirely captivating!

There was one thing that bothered me. In chapter one, we’re introduced to Sydney, her father, mother, brother Peyton and Ames, a friend of Peyton’s. The scene starts with the reading of the jury’s verdict for Peyton’s trial. Ames is first mentioned on page 2, and I found his introduction to be confusing. Unlike the other above mentioned characters, it’s not made clear who he is to Sydney and her family [this is revealed mid-chapter 2]. I actually went back to page 1, thinking I’d missed something. A similar thing could have happened with Peyton, but Dessen uses a flashback to confirm that “brother” and “Peyton” are the same person. I feel this confusion could have been avoided by using a similar technique.

As a final point, Dessen’s writing is stunning, but this fine portrayal of invisibility is what truly stands out to me. This is an important read not only because of the various issues explored in the plot, but how the characters express them. Saint Anything is composed of a very relatable cast for the young adult audience. In my opinion, this is a near mirror image of what the reader might have, is or could experience and to see yourself in the characters is a feat. For this, I give Saint Anything five stars.

Honestly this book is the best book i've read in a while! Sarah Dessen is a wonderful author who has a incredible gift of being able to write so good! I hope to see a sequel of Saint Anything. Overall i would recommend this book to anyone. if you're interested in a good read i recommend this one! This was i book that i could not put down, really sad this ended. It was like i was there in the story with them. Happy that Mac and Sydney get together, overall excellent book.

“It was unrealistic to expect to be constantly in the happiest place. In real life, you're lucky just to be always somewhere nearby.”

“I’d done the right thing. I always did. It just would have been nice if someone had noticed.”

“I was used to being invisible. People rarely saw me, and if they did, they never looked close. I wasn't shiny and charming like my brother, stunning and graceful like my mother, or smart and dynamic like my friends. That's the thing, though. You always think you want to be noticed. Until you are.”

“You only really fall apart in front of the people you know can piece you back together.”

“The future was one thing that could never be broken, because it had not yet had the chance to be anything.”

“I was used to being invisible. People rarely saw me, and if they did, they never looked close. I wasn't shiny and charming like my brother, stunning and graceful like my mother, or smart and dynamic like my friends. That's the thing, though. You always think you want to be noticed. Until you are.”

akzfineart thinks this title is suitable for 12 years and over

xzhang17 thinks this title is suitable for 12 years and over

Sydney has been overshadowed by her charming older brother Peyton all her life. When her brother is involved in a drink driving accident and sent to jail, Sydney struggles to deal with the aftermath. First off, as a result of mounting lawyer bills, Sydney decides to withdraw from her expensive private school Perkins Day and enroll at the local public school Jackson High. Although initially lonely and estranged from her busy friends at Perkins, Sydney soon makes friends of her own. One afternoon after school, she enters the Seaside pizza parlor and becomes fast friends with the Chathams who own it. Their daughter, Layla, is in the same grade as Sydney and coincidentally attends the same school. As the two girls grow to know each other, they mutually support and understand what the other is going through. The romance aspect plays a large part in shaping this book. When Sydney falls in love with Layla’s brother Mac, she is both on cloud nine and worried about how Layla will react. How will Sydney juggle her secretive relationship with Mac as well as carrying her brother’s guilt?

Sydney is a teen who has always been overshadowed by her older brother and overprotected by her mother. But she finds love, friendship, and independence with a cool group of teens at her new high school. Loved the main character and her struggle to break free.