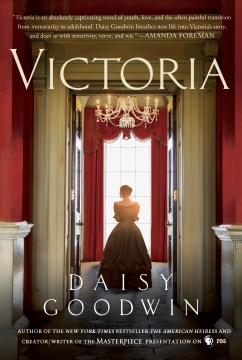 Author of the Month: Daisy Goodwin

January's author of the month has long been a favorite at ELPL for her page turning historical fiction titles, perfect for fans of period dramas like Downton Abbey and now, Victoria.   Goodwin began her career in television creating documentaries and later transitioned to a career in writing. In 2011, she released her first book, The American Heiress. The novel, about a wealthy heiress at th… (more)

This is an historical romance loosely based on the early years of Queen Victoria's reign. The author has taken some liberties with history: Melbourne was fifty years old in Victoria's early reign & there is no evidence in any of Victoria's private papers that she ever proposed to him. Nevertheless, it is an engaging story, well written, with interesting well-defined characters

Very readable and enjoyable historical fiction about Queen Victoria's earliest days in her reign. The current PBS series is based on this novel, and the book does read like a screen or teleplay - which isn't a bad thing. Will be on the lookout for Goodwin's next.

This book is about Queen Victoria's early life. She began her reign at the age of just 18, and how she finds her place in the monarchy.

For me, this type of historical fiction is tough to read. I find that I enjoy situational historical fiction quite a bit more than something about a specific person. However, the short chapters helped me along and I was able to finish this somewhat slowly. I kept going back and forth between whether I thought Victoria was naive or she was really executing a plan to make her own way as a queen. Sometimes she was just so young, and self-centered. Other times the things that she fought for made sense. I also struggled with the other characters. I often felt bad for her mother, and frequently felt that she sort of deserved how things went. I mostly felt bad for Lord M though, he seemed in a tough spot. I started to enjoy the book a bit more toward the end when she finally gets to see Albert as an adult. Overall I found myself not overly compelled with Victoria's story, but the short chapters helped me power though. I am so far enjoying the show quite a bit more than the book! A rarity for me!

A lovely, brilliant story of the early years of Victoria's reign. I was sucked in from start to finish, and particularly enjoyed Goodwin's interpretation of Victoria's relationship with her first Prime Minister, Lord Melbourne. I don't necessarily think that it actually was that way, in fact, I definitely don't, but this rendition of it makes for lovely reading. If you're a fan of the Masterpiece series Victoria, then this book will be very familiar to you, though it has some extra goodies thrown in that wouldn't work well in the television format but are just perfect for a novel. An excellent story.

Excellent Historical Fiction, based on the life of Queen Victoria. She becomes Queen at the very young age of 18, in a world & time that was "ruled by men". She gets the help of Lord Melbourne and also some help from her Mum. Her uncle, the Duke of Cumberland and others would love to see her relinquish her power. This young woman will surprise you at her strength. There is also a PBS series that is also excellent.
.

VICTORIA is light (emphasis on “light”) historic fiction that follows the early days of the young English monarch’s reign up to her betrothal to Prince Albert. It’s a good choice for when you’re on vacation or between weightier works. Despite the Queen’s name in the title, I found her prime minister, Lord Melbourne, to be the more interesting and sympathetic figure in the book. What’s more it’s uncertain how much of his relationship with Victoria is based on fact or author Daisy Goodwin’s imagination. To me, a lot of VICTORIA read like a chaste Harlequin romance so perhaps the story will translate better to the small screen in the PBS Masterpiece presentation. I look forward to watching it.

Good, light read - but would really like a historic novel about a queen to, just for once, not ONLY be about how she does or doesn't fall in love. There has to be more about these amazing women who reigned through decades of peace and prosperity, other than what man they chose to support them.

The writer of the PBS Masterpiece theater, Victoria, gives us insight into the world of the young Queen Victoria. Focusing on the diaries of the first two years of Victoria’s reign, the author has created a picture of a young woman, not only seeking guidance but love as well. Although, at times, the reader will have trouble sympathizing with the young queen, an appreciation of her strength will be gained.

I loved this book. It was so good even though it was the exact same story as the television series. The book is different and more personal than the TV series because you can know what the characters are thinking without having to guess. It was an enjoyable and good read. I look forward to reading more of Goodwin's works.

This story revolves around the early days of Queen Victoria's reign up to her marriage to Prince Albert. Goodwin delivers an interesting look at the life of one of England's most beloved monarchs and her early years as queen. The story felt real, the characters were engaging, and overall I liked it a lot.

Mamita28 thinks this title is suitable for 13 years and over

Historical novelist and screenwriter Daisy Goodwin tells the story of a young Queen Victoria in her historical fiction novel Victoria. The story opens with eighteen year old Alexandrina Victoria inheriting the throne from her uncle in 1837. Most people thought she was too young, sheltered, and female to be Queen of Great Britain and Ireland. She surprises them all with a before unused authority and power and as one of her first acts as Queen, changes her name from the hated Alexandrina to Victoria. Raised under the strict Kensington System, Victoria was sheltered from society and allowed to walk down stairs only holding the hand of her governess and was forced to sleep in the same room as her mother. As Queen, her first experience of independence is fascinating to witness.

As Queen, Victoria must learn about her people, politics, and what it means to be a female monarch. She relies heavily on her first Prime Minister, Lord Melbourne, who has a reputation as a ladies man. There is definitely an attraction between them, but her family wants her to marry her cousin, Prince Albert of Saxe-Coburg. They had met as children and Victoria remembers him as stiff and serious. She is most certainly not interested.

This is a coming of age tale of a young woman thrust unexpectedly into a position of great responsibility. Victoria is stubborn and at times naïve but she is also clever and witty. The characterization in this book is wonderful and you feel as if you really know these famous historical figures. It is a page turner despite being a work of historical fiction. Author Daisy Goodwin studied Victoria’s diaries as a student at Cambridge and became fascinated by the feisty young version of a sometimes sober elderly monarch.

The novel follows the early period of Victoria’s rule and is a companion to the television series written by the same author. (The show is currently airing on PBS.) The romance and political dynamics keep the pace high in this novel that retains a light tone throughout. Victoria is not a serious historical account of facts, but a lovely insight into the personality and motivations behind a young Queen.