Saved Searches Advanced Search
The library's website and online catalog will be out of service on Sunday, September 20, starting at 8am.  Learn more.
Print 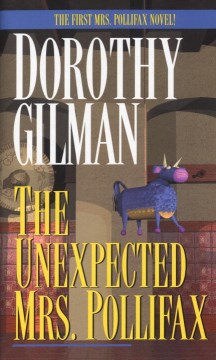 Mrs. Virgil (Emily) Pollifax of New Brunswick, New Jersey, was a widow with grown, married children. She was tired of attending her Garden Club meetings. She wanted to do something good for her country. So, naturally, she became a CIA agent.

She takes on a &;job&; in Mexico City. The assignment doesn&;t sound dangerous at first, but then, as often happens, something goes wrong. Now our dear Mrs. Pollifax finds herself embroiled in quite a hot Cold War&;and her country&;s enemies find themselves entangled with one unbelievably feisty lady.

I have read this book several times (the first time was when I was in high school), and I love it. Rereading it now was a revelation.

When I started reading The Unexpected Mrs. Pollifax (first published in 1966) this time, I realized that Mrs. Pollifax was in her 60s, and people kept referring to her as “elderly.” As I am now a person in my 60s, I found that shocking! I do not feel the least bit “elderly”!

Mrs. Pollifax goes to Washington, D.C., visits her Congressman (of course, he was a man in that era), obtains a letter of introduction, and takes a bus out to CIA headquarters to volunteer to be a spy. The first person she talks with explains that is not how it is done, but by accident she meets Mr. Carstairs, who thinks she is absolutely perfect for a simple courier assignment in Mexico City. She is indeed perfect for that job, but things go awry, and she is taken prisoner by dangerous people. This is during the Cold War, and Red China is a big threat in the world.

Mr. Carstairs is horrified and is sure that his elderly “lamb” will be slaughtered.

There are others in the book who clearly think (and say) that people in their 60s have one foot in the grave. I can not believe I did not notice this when I read the book in the past, but now that I am in my 60s, I find this shocking and offensive.

And of course, Mrs. Pollifax is a woman, so everyone from her doctor to her adult children to Mr. Carstairs to the people who abduct her think she is not only elderly but incompetent. I am indignant at the disrespect shown to Mrs. Pollifax by all the MEN around her!

Because she is NOT incompetent at all. She is intelligent, courageous, resourceful, creative, strong, resilient, kind, compassionate, and upbeat in the face of danger. Another character who is 63 says “We are neither of us young, you and I, we are each reaching the end of long lives,” (!!) and notes that she is good under pressure. She is caring and connects with people. She has common sense (which is not nearly as common as the term would suggest).

Partly because everyone around her underestimates her, she is able to accomplish things that the men in this book only dream of. She is heroic!

In fact, as I reread this book now, I realize that The Unexpected Mrs. Pollifax is feminist literature. Mrs. Pollifax is a great role model for women of all ages! It is never too late to follow your dream, and being underestimated by others gives you openings to accomplish more than you (and they) think is possible. (And the life experience gained by living a long life is valuable in so many ways.)

I highly recommend this delightful book!

The first in a well written thoroughly enjoyable series of mysteries featuring the irrepressible Emily Pollifax. For the most part a quick-moving, feel-good series with plenty of interesting characters, compelling settings and decent plots.

I love this book!!! It's so fresh and new to see this stereotypical, elderly, respectable woman live in the world of espionage. It's almost like Clancy, but a lot shorter and more action-packed.

I first rated this book 1/2 *. Then went back and tried to read it again. I am glad I did: it was really delightful. Mrs. Pollifax (well, PC didn't exist then, so she was Mrs.!) was absolutely unexpected and I had many a chuckle with her antics. Highly recommend it.

I loved this story of a woman deciding to pursue her childhood ambition of spying after she reaches the age of independence and leisure. And my kids are laughing along with me now that I've put the audiobook on.

Funny story that is good for all ages.

I'm not usually a fan of cozy books. But Dorothy Gilman's books have fascinated me for years. I do love the Mrs. Pollifax series; in fact, if I had 5 thumbs, they'd all be UP high for Gilman's Emily, who's sweet and fun, intelligent, humorous and rather crazy in a positive way. Emily Pollifax is a marvelously well-rounded older woman who wants to trade her 'empty nest' for a chance to help her country -- and she does! It's not too realistic, but that's where some of the great fun comes in. Gilman's other books, however, are incredible as well: The Clairvoyant Countess books, The Nun in the Closet (a favorite), Thale's Folly (absolutely LOVE it!) and everything else she's written are all books I've read and reread many, many times. I've researched a great deal in order to find read-alike authors &amp;amp; books, but thus far haven't found a thing that compares. I guess a character's innocence paired with intelligence is hard to come by - or quite difficult to write with Gilman's cunning balance. If you love funny, introspective, smart tales and an author who seems to genuinely enjoy her own stories and wishes to share these wonders with her public, you'll find Dorothy Gilman's books to be sink-down-into, happy ways to escape the world for awhile. I hope you find what I've discovered - and continue to discover - within all the pages!

This is the first in the series, where she decides to become a CIA agent. What is supposed to be a routine I'm-just-a-little-old-lady-tourist-in-Mexico-City item pickup turns into a very interesting adventure. It ages really well, too.

Mrs. Pollifax is one of my all-time favorite characters. She's an older widow who sets out to do something she never had a chance to do when she was younger. She goes to the CIA to ask if the agency accepts volunteers. In the waiting room, she's mistaken for an experienced operative who has been told to come disguised as an elderly lady. Emily Pollifax is surprised to be immediately sent on a mission, but she rises to the challenge and become a very "unexpected" and successful spy. This is the first of the series.

Mrs.Pollifax if a very good book to read! It has suspense and a bit of action

EuSei thinks this title is suitable for 16 years and over

Coarse Language: There is a lot of people cussing. Nothing worse than the d-word, though