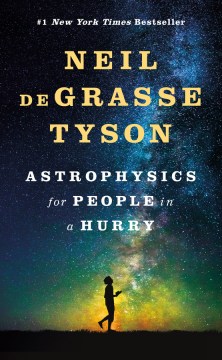 Astrophysics for People in A Hurry

"The essential universe, from our most celebrated and beloved astrophysicist. What is the nature of space and time? How do we fit within the universe? How does the universe fit within us? There's no better guide through these mind-expanding questions than acclaimed astrophysicist and best-selling author Neil deGrasse Tyson. But today, few of us have time to contemplate the cosmos. So Tyson brings the universe down to Earth succinctly and clearly, with sparkling wit, in tasty chapters consumable anytime and anywhere in your busy day. While you wait for your morning coffee to brew, for the bus, the train, or a plane to arrive, Astrophysics for People in a Hurry will reveal just what you need to be fluent and ready for the next cosmic headlines: from the Big Bang to black holes, from quarks to quantum mechanics, and from the search for planets to the search for life in the universe"-- Provided by publisher.
Publisher: New York ; London : W.W. Norton & Company, [2017]
Edition: First edition
Copyright Date: ©2017
ISBN: 9780393609394
0393609391

We are part of this universe; we are in this universe, but perhaps more important than both of those facts, is that the universe is in us. -- Neil deGrasse Tyson Astrophysicist and science communicator, Neil deGrasse Tyson's latest book, Astrophysics for People in a Hurry - a succinct collection of answers to common questions about the universe - was released earlier this month. But Tyson … (more)

Astrophysics for People in a Hurry is simple, humorous, short, and somewhat easy to consume. Though there are parts where "harder to understand" science is explained, I think you can still finish this book with some newly gained information. Tyson explained the basics well, although not every concept in this book is easy to understand, it's still astrophysics - beware!

Astrophysics for People in a Hurry by Neil deGrasse Tyson is exactly what it sounds like, a book summarizing the extremely difficult concepts of astrophysics for anyone to read. With my knowledge obtained from high school science courses I was able to follow along well as Tyson does a good job breaking down the hard concepts. The writing is concise, easy to understand and charismatic. I found the book to be interesting and I would recommend it to anyone who finds science interesting or anyone who loves to learn. I would give Astrophysics for People in a Hurry four out of five stars.
@Nessie of the Hamilton Public Library's Teen Review Board

I'm not in much of a hurry, and I have a very limited science background, so I wasn't sure if this would be the book for me. How wrong I was. Astrophysics for People in a Hurry helped expand my knowledge beyond our galaxy and into the universe (or universes) beyond. The author takes you to the end of time -- or is it the beginning? There is also the possibility that there really is no time at all; it's just a human construct to get the flight schedules on time. So it makes sense sometimes to not be in a hurry -- unless a bear is chasing you. The big bang theory is explained, as are the possible big bang theories to come. My writing is confusing because I'm a novice at astrophysics. But trust me, Neil DeGrasse Tyson will give you all the expertise you need in this universe, as well as the duplicate you in a parallel dimension. Happy space travels!

This nonfiction book for middle grade children was really pitch perfect. There was enough science to make it interesting and informative but it did not overwhelm. It was also funny without being too silly. Highly recommend.

The book has the classic Neil DeGrasse Tyson signature all over it! It's literally what the name says, in that it's not too technical, but is neither shallow. Tells the story succinctly, sometimes not very precisely, but with enough zest to keep the reader captivated and enough fidelity to never give her an inaccurate picture.

The first problem I had with that book is that it's not really well organized. The chapters don't follow any pattern. For example, consecutive chapters in the book talk about dark matter, periodic table of elements, why things have the tendency to be spherical, and then light. And thus, when you begin a chapter, you'd wonder how did the previous chapter link to this!

That said, the book is full of eye-popping information about practically all streams of astrophysics. From the concept of Iridium paperweights to the real story of Tuscan municipality installing low pollution Sodium lamps, from the explanation about why most things in the night sky are spherical yet Milky Way is round but flat to poking into dark matter and dark energy to perfect depth that's neither too technical nor too cursory, the book is teeming with magnificent pieces of information. The chapter "The Cosmos on the Table" is particularly intriguing because of the way the author explains an astrophysicist's perspective of the Periodic Table. I don't think I can ever look at the Periodic Table the same way I was taught in school.

The book is also funny, and in a nerdy way, It quotes Bible at times, the chapter names are quirky, and the joke about astronomers try to find a solution by considering a 'spherical cow' is specifically witty.

For a very "equation" oriented person like me, there were a few places where I found the explanations and comments sort of lacking exactness. For example, in one of the chapters, the author says, "On thirteen mile long Phobos, a 150-pound person would weigh a mere four ounces", and I almost thought I should send an errata to make it 'a person that weighs 150 pound on Earth'.

In conclusion, the book is a great read for anyone interested in astrophysics. It doesn't get scholarly, but then, you should have guessed that from the title.

For anyone with a basic understanding of science this book is a great place to begin a deeper dive into astrophysics.

This is a gateway into the formidable and beautiful world of physics. Although coming into this read having a rudimentary knowledge of physics/chemistry is helpful to grasp the concepts discussed in this book, it can absolutely be read by anyone. Neil DeGrasse Tyson clearly knew how to write a book about physics for those who aren't conversant in it. Even with this book being relatively small, I am walking away with what seems to be a plethora of information. Great read and would recommend for people getting into science or anyone who wants to make conversation about the cosmos.

I've seen De Grasse Tyson on tv before and always found him a bit of a blow hard. Funny at times but basically just spews scientific facts showing off his vast knowledge but to little end. I got the book thinking that perhaps his writing would have more of a point to it but alas it seemed like more of the same. A lot of facts and he does have a good way of explaining things in layman terms. However, most of it seemed disorganized and rambling. The Tao of Physics by Fritjof Capra was much better read for me personally.

This doesn't quite reach the level of pop-science for me. It's a quick read (I read the first 115 pages or so in one sitting). However, I was probably only understanding about half of what I was reading. I found myself understanding the broad strokes of what NDT was trying to convey, but not the details.

I agree with an reviewer who said: "I suppose it isn't easy summarizing astrophysics in 200 short pages but this could have been better. He frequently does not explain certain concepts and ideas." I found there were too many concepts mentioned in a single sentence without any further explanation before NDT quickly moved on to another topic.

wordsaremeaning thinks this title is suitable for 10 years and over

But what if the universe was always there, in a state or condition we have yet to identify—a multiverse, for instance, that continually births universes? Or what if the universe just popped into existence from nothing? Or what if everything we know and love were just a computer simulation rendered for entertainment by a superintelligent alien species? These philosophically fun ideas usually satisfy nobody. Nonetheless, they remind us that ignorance is the natural state of mind for a research scientist. People who believe they are ignorant of nothing have neither looked for, nor stumbled upon, the boundary between what is known and unknown in the universe.